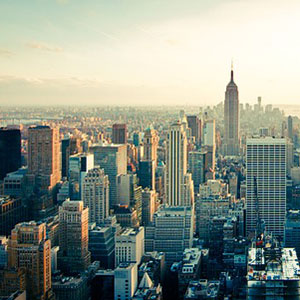 Discover the many treasures along the Eastern Seaboard of America-from New York City to Miami Beach. Your budget-minded vacation leaves nothing out in this adventure from the Northeastern U.S. to South Florida. Begin in the “Big Apple”-New York City! Tour the city’s iconic sites: Broadway, the Empire State Building, Rockefeller Center, Chinatown, Wall Street, and more. Take in a Broadway show or dine out in the city that never sleeps. In Philadelphia, take a guided tour of the “City of Brotherly Love” with free time to visit the Liberty Bell and Independence Hall. Arrive in Washington, DC for a guided tour of legendary landmarks: The graves of John F. Kennedy and Robert F. Kennedy near the eternal flame at Arlington National Cemetery; Capitol Hill, the White House; and the Lincoln and Vietnam Memorials. Travel to Virginia to visit Colonial Williamsburg, then to Wilmington, NC, to explore the Riverwalk along Cape Fear River. Overnight in Myrtle Beach, SC, and stop in Georgetown-settled in the early 1700s and today a thriving port with shrimp trawlers and fishing boats, historic homes, and churches pre-dating the Revolutionary War. You’ll also tour the city of Charleston-with its pastel row houses and horse-drawn carriages. Drive through the Gullah country on your way to Beaufort on Port Royal Island in South Carolina’s low country. Then, cross into Georgia for a trolley ride tour of Savannah. Shop on River Street among the moss-covered live oaks and historic homes and see Forrest Gump’s bench in the Savannah History Museum, then visit historic St. Augustine. Take a guided open-air tram tour of Daytona International Speedway and the Motorsports Hall of Fame. Arrive in Miami Beach, and take a tour of the South Beach Art Deco District. Relax on Miami’s beautiful beaches to conclude your affordable vacation on the Eastern Seaboard.

Capitol of West Virgina, whistle stop on the river cruise.

Located on the northern coast of the state of Florida in the United States, Daytona Beach is a popular winter sun destination and the site of the famous Daytona 500 car race.

The nation’s largest city, New York is a major U.S. port, the country’s trade center and with its banks and stock exchanges, the financial center of the world.

Theaters, nightclubs, shops, and restaurants draw millions of visitors. With all the sights to see, New York is sure to be a fun filled getaway!

Many government offices and historic sites.

Prices are per person, land or cruise only, based on double occupancy. Offer subject to availability and change without notice. Some restrictions may apply. Please ask us for details.

Charges not included in the land vacation price: airfare to and from the start of your vacation; airline baggage fees including checked and/or excess baggage fees; Federal inspection fees for the Federal U.S. Customs and Immigrations; agricultural tax; other per person taxes imposed by government entities; applicable cruise taxes, fees, fares and port charges; passports; visas and vaccinations; transfers; tips to your Tour or Cruise Director, Local Host, driver, Local Guides, and/or ships’ crew; gratuities on ferries, trains, and cruise ships; laundry; telephone; minibar; alcohol, beverages, and food outside of the contracted menu as presented at a hotel or restaurant (these extra items will be billed to you before leaving the hotel, ship, or restaurant); additional excursions and activities not listed as ‘included’ in the itinerary; porterage at airports or train stations; Travel Protection premiums; and all other items of a personal nature.